Posts from the ‘Soups & Stews’ Category

I love when a soup like this comes together! I found myself with a handful of sweet potatoes and a few juicy Bartlett pears, both which needed action before being past their prime. When I discovered a recipe for a sweet potato, pear & bacon soup, I happily plucked some bacon from my freezer and got right to work!

In this Mark Bittman recipe, he calls for browning the bacon, removing it to a paper towel lined plate and adding the shredded potatoes and pears to the salty hot grease…yes, an excellent start… 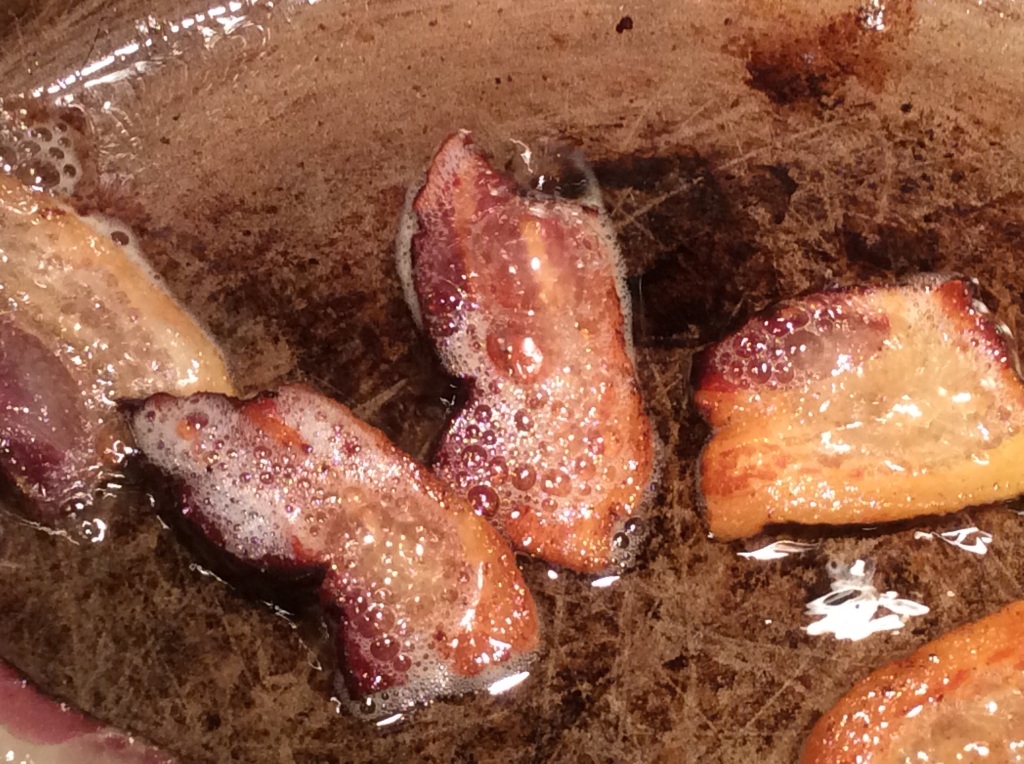 Then to the softened shredded vegetables and fruit, add allspice, cayenne, stock or water, and cream and let it bubble away for a quick 10 or 15 minutes. Once the squash is tender, whirr the immersion blender to carefully puree. Taste for seasonings – it should be a lovely mix of earthy sweet potato, fruity pear, a little smoky, with the perfect amount of kick from the cayenne. Garnish with the crunchy bacon and you will be one happy camper. Here’s to surprise victories while cleaning out the extras! 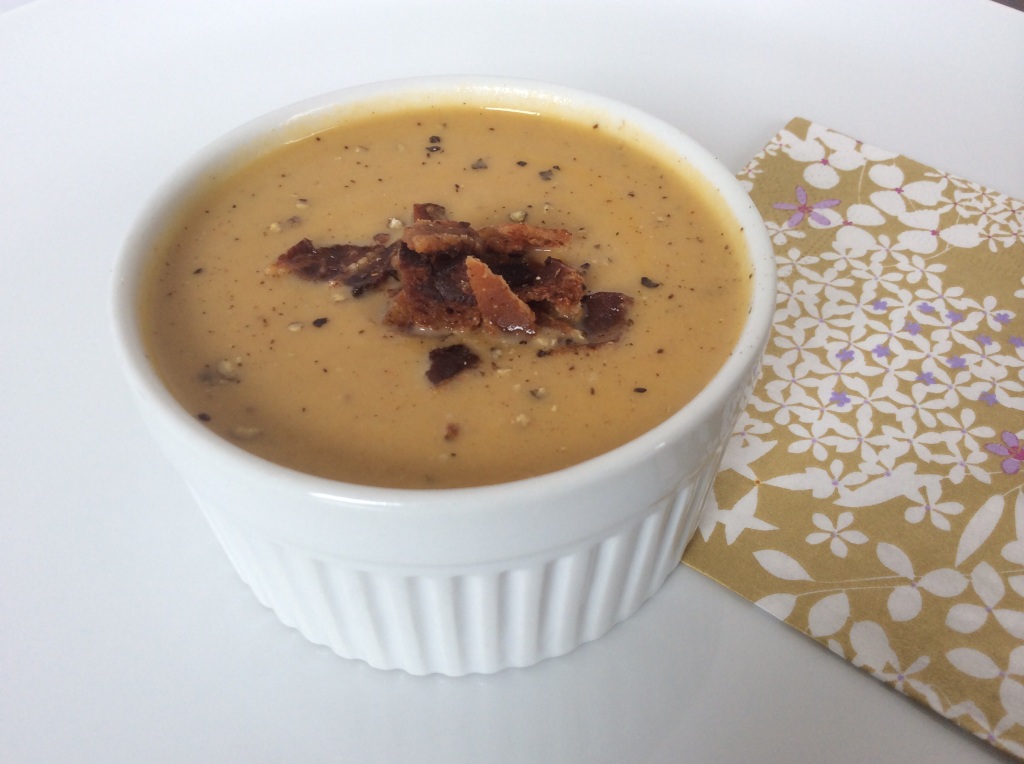 Directions:
Chop 8 slices bacon into 1-inch pieces.
Add bacon to large pot over medium heat.
Cook, stirring occasionally, until crisp, 5-10 minutes.
Peel & trim sweet potatoes, cut into small pieces to feed into food processor.
Peel & core pears.
Trim, peel & quarter the onion.
When bacon is crisp, transfer it to paper towel lined plate with a slotted spoon. Turn heat to low.
Shred vegetables & fruit in food processor with grating disk; empty work bowl into pot as it fills.
Raise heat to medium-high; add 1t allspice, 1/4t cayenne, sprinkle of salt & pepper.
Cook, stirring, until spices are fragrant, about one minute.
Add five cups stock or water and one cup cream.
Bring to a boil, reduce heat so that it bubbles gently but steadily.
Cook until squash is fully tender, 10-15 minutes.
Turn off heat and run an immersion blender through the pot, or working in batches transfer it to an upright blender and carefully puree.
Reheat the soup for one or two minutes if necessary. Taste and adjust seasoning.
Divide soup among four bowls, garnish with bacon and serve.

‘Tis the season to embrace the season. We are in the deep winter now. Here in New England, we are buried in snow, with snowbank peaks and valleys higher than our heads. By these involuntary or voluntary means, it’s time to slow down, reflect a little more often and cozy up. It’s also a great time for Parsnip Soup.

This soup starts with a pound of parsnips, which may look like a lot, but between their thick heads and spindly bottoms, you’ll peel and chop down to the right amount in no time. Same goes with the apples and potato: a quick peel and chop, and suddenly you’ll have a beautiful blend of white wintry colored chopped ingredients: parsnips, apples and potato.

It’s simply a one-pot process after that. Start with browning the leeks, add the chopped ingredients, a little broth, a little water, boil and simmer. Then puree, add a bit of cream, salt & pepper and garnishes.

A quick note about broth: I often use Better Than Boullion Chicken Base for any recipe calling for broth; it’s has a great chicken broth-y flavor and because it’s a paste you mix with water, you can adjust potency for a recipe, like this one, which calls for reduced sodium.

1) Heat the butter in a large pot over medium heat. Add the leeks (reserving 1/2c for garnish). Cook, stirring for five minutes.

2) Add the parsnips, apples, potato, broth and 4 cups water. Bring to a boil; reduce heat and simmer, partially covered, until the vegetables are tender, 20-25 minutes.

3) Working in batches (or with a handheld immersion blender), puree the soup until smooth. Stir in the cream. Taste for salt & pepper, and season accordingly. Top with your preferred garnishes.

4) Garnish: Make just before serving: In a large skillet, heat 1T butter over medium-high heat. Add the leeks, cook, stirring, until golden brown, about 3 minutes. Lower heat to medium, add apple and pecans, stir together, cook for 2 or 3 minutes (goal here is a quick warming and mixing of ingredients – be careful not to overcook). Sprinkle salt and a bit of pepper, and generous grate of fresh nutmeg. 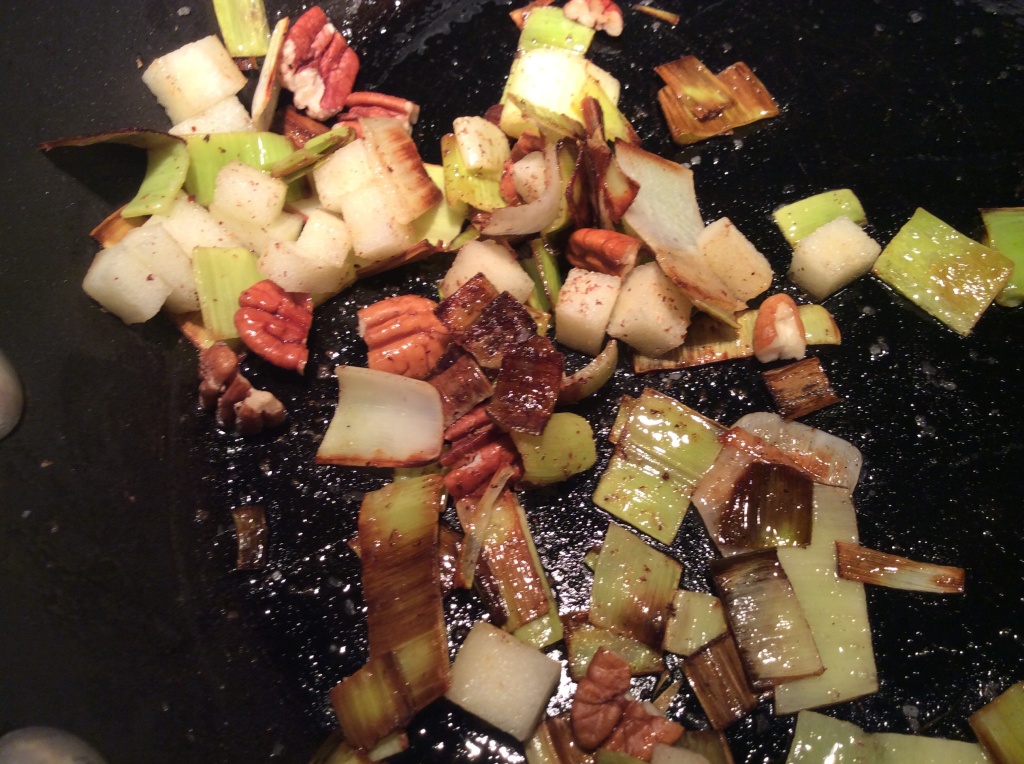 The end product will be a hearty and comforting soup with sweet apple, crunchy pecans, crispy leeks and fragrant nutmeg. Enjoy!

So the official sign of Spring happens today in Boston: the Red Sox home opener! The sound of a baseball game on the TV prompts a pavlovian response where I see open doors to the deck and feel a soft, warm breeze blowing in. The reality though is that it’s still quite cool here and I’m not quite ready to risk a vest instead of jacket, and a fuzzy hat stuffed in the pocket remains wise insurance. But I must be yearning for a teensy taste of summer because before I knew it, I had flagged a Rick Bayless recipe for creamy corn soup with roasted poblano, sauteed onion & garlic, pressed through a sieve to make a silky smooth texture. I bought a few ears of corn at the store, and yes, I know they are coming all the way from Florida, a long road trip to Boston, but please forgive me. I try to make it a point to never wish time by, to cherish each day, but maybe just for a moment, we can let our thoughts drift to summertime and taste it…call it a soup of hope…a soup of warm nights and sun burned shoulders.

Yes, delicious. Thanks for the quick departure. Now, back to the present, to each brisk, bright morning, checking on the daffodil greens sprouting up through the soil and welcoming the littlest sparks of green on the branches. Spring is here. Let’s play ball!

Something about Mardi Gras – or the fact that I received an enormous ham steak in my meat CSA – and I had jambalaya on my brain this week. A little New Orleans trinity of onions, celery and green peppers sauteeing on the stove, and I was on my way to making a big batch. Add to the trinity: your favorite cajun seasoning (usually a concoction of paprika, salt, garlic, sugar, oregano, cayenne and thyme), some diced tomatoes, rice, stock and cook away for about 15 minutes (or until rice is tender); finish with a little chopped ham, spicy sausage, and shrimp, if you’ve got ’em, and you’re in business!

This soup offers the neatest tricks: it is good for you, is easy to make, and has a short ingredient list: butter, celery stalks, onions, apples, celery root, bay leaf, thyme, stock. And if that weren’t enough, when I tasted it for the first time, I thought : ‘oh yes, celery, so lovely and familiar’, but the flavors swirl and show a few more layers and I wanted another spoonful, and then cleaned my bowl, lapped my spoon and proceeded to share samples with a few friends. I am now making another batch this week. Thank you my favorite Dorie Greenspan for this! Here is a 2009 link to her recipe: http://doriegreenspan.com/2009/01/snow-again-soup-again.html

And on this smoking hot August day, here is a little chilled summer soup for you: cantaloupe, ginger, lime, mint, Lillet, strawberry. 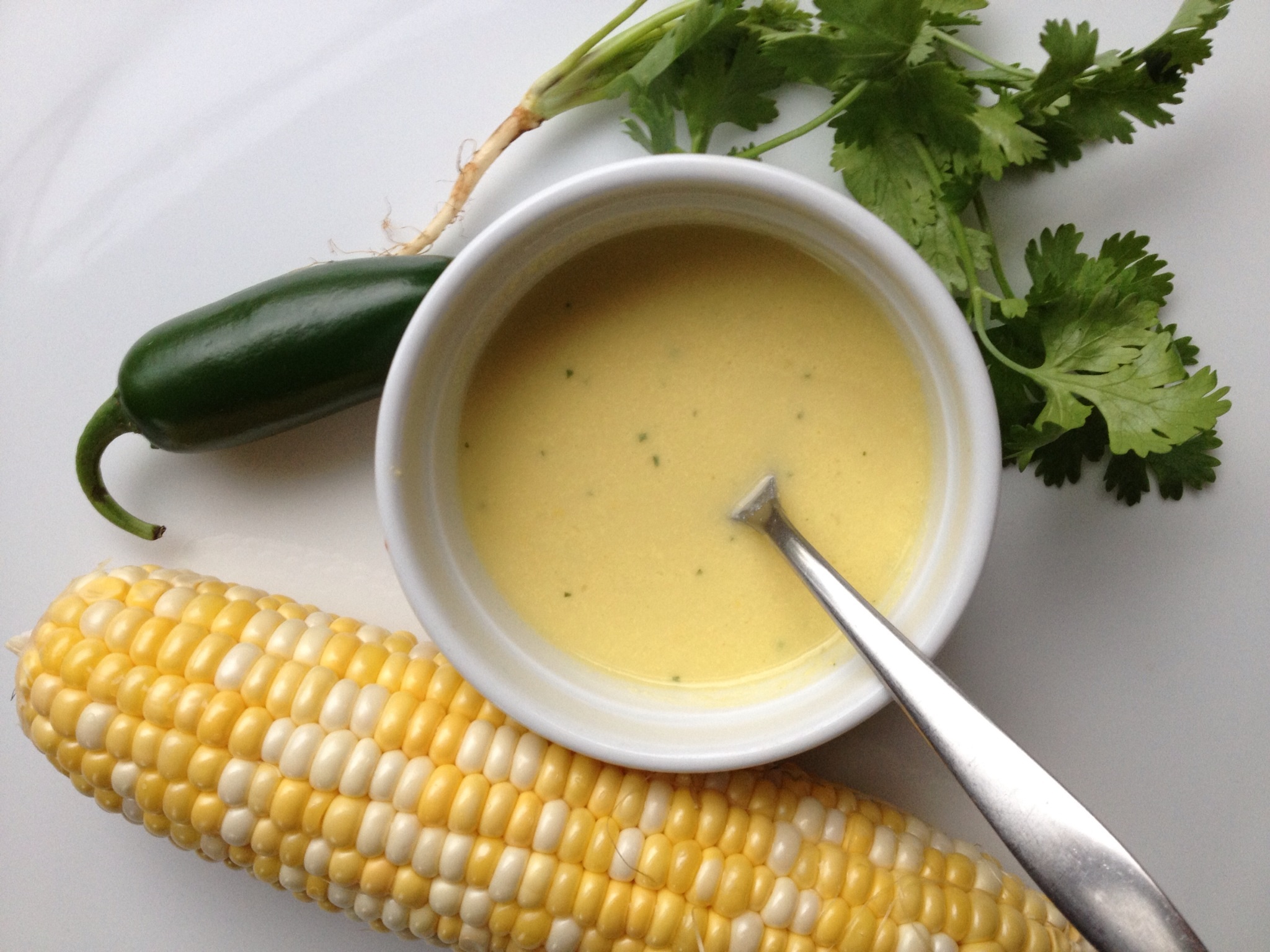 One of my favorite uses for carrots and tarragon is this quick, healthy soup. Short ingredient list: carrots, leeks, fennel, potatoes, tarragon, and vegetable stock.